Save up to 80% of Your Valuable Time 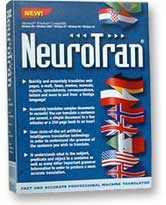 NeuroTran® for Macintosh is a software translator that translates books, web pages, documents, e-mails, faxes, memos, manuals, reports, spreadsheets, correspondence, letters and more to and from a foreign language.

Our research studies have shown that NeuroTran® users can save up to 80% of the time they spend writing and understanding complex documents written in a foreign language.

You can translate a simple document in a few minutes! Hundreds of thousands of experiments have shown that our software can produce the most accurate translations compared to all other known competitors.

NeuroTran® is a high end translation product. It translates sentence-by-sentence by using advanced artificial intelligence rules. NeuroTran® understands what the subject, predicate and object are in a sentence. Based on this and other important information it inflects translations properly and rearranges word order in the translated text as well as chooses an appropriate translation for any given word based on the type of text being translated.

NeuroTran® analyses the text you wish to translate in order to identify its type, e.g. is it a technical, computer, medical or some other type of text. Once NeuroTran® has performed this analysis it will choose the translations that are more appropriate to the identified type of text. This feature is unique to NeuroTran®.

No more flipping through the pages of a dictionary to find a translation. With NeuroTran®, you can easily and quickly translate single words, phrases and sentences. To translate, call up NeuroTran® and type the word, phrase or sentence in either language. Almost immediately NeuroTran® will translate the word, phrase or sentence and you can then choose alternative translations. Simply choose the translation you want and NeuroTran® will automatically replace the original word or phrase with the translation you selected. You can even customise the dictionary by adding your own new words, phrases and translations - any number you want! NeuroTran® chooses which verb conjugation to use. For those languages that allow for it, NeuroTran® chooses inflections for other words also. You cannot find this feature in any printed dictionary nor any dictionary in computer format.

Because of its advanced and intelligent features NeuroTran® is a must-have for everyone who is in contact with a foreign language (linguists, businessmen, students, translators, researchers, professors, developers, IT specialists...).

If you need much faster and more accurate translation, we recommend NeuroTran® PRO. NeuroTran® PRO, as compared to the Standard Edition of NeuroTran®, has the following additional features:

For non-English language support (e.g. Central European, Japanese, Russian, etc.) you need to use Language Kits which should be supplied on your Mac OS CD's.

All older Mac InteractiveTran™ language pairs and their associated dictionaries can be used inside of the NeuroTran® interface.

If you would like to find out more information about our other products and services that run on other platforms, please choose here:

For more information about our software please send an e-mail to: [email protected]